Beth shares her thoughts and feelings on the February 2017 residency

Starting the second NYDC residency personally evoked a whole cocktail of emotions. I was ridiculously excited to get in the studio with everybody again. I felt overwhelmingly happy to simply think about nothing but dance for an entire week with a beautiful bunch of talented and amazing individuals. Yet I was still slightly anxious as the premiere was much more visible than it was in the first residency which meant that I had to be prepared for an incredibly intense week of counts, new and familiar material, complicated spacing and physically demanding schedules. 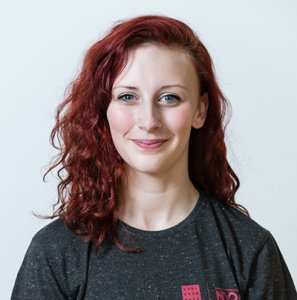 With no time to waste, upon arrival at Hymer’s College we were immediately working in the studio with Damien, James and Aimilios who was joining us for the first time. In all honesty the nervousness never quite settled, however the excitement took the front seat as the room was filled with high spirits and raw determination, it was amazing to see everybody dance again. Almost as though we hadn’t been a part since October. One of the most profound differences in this residency was how much further we were bonding as a company, even finding time in our breaks and dinners to improvise together and make connections with as many company members as possible. Seeing each other improvise was such a highlight, even Damien joining in at one point! This made the entire process even more special, because by this point there was always someone to laugh with, go through things with and to motivate you.

As days passed by, more and more of the piece ‘Tarantiseismic’ was surfacing, building large chunks of material that initially felt impossible, but as we worked together as a company, we soon realised that no matter how tiring it is, we can and will do it, empowering one another to keep going and really adore that almost tangible energy building within all of us! The best thing also was working in the studio theatre in Hymer’s, which had no mirrors. At first this was a shock to the system but very quickly I realised that dancing without mirrors leaves less room for judgement of yourself, which essentially made dancing the material even more incredible. As we all emotionally said our goodbyes on the final day, even closer than when we said hello earlier on in the week, it was terrifying but more importantly so exciting knowing that the next time we are all together in April, it will be in preparation of the premiere.